You are here Home > Radars and Atmospheric 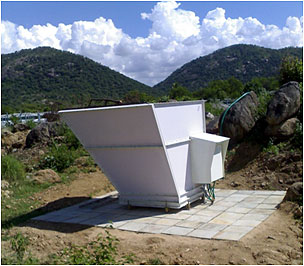 Since past three decades SAMEER has played significant role in developing indigenous Radar based atmospheric instrumentation . We have first built the iconic MST radar at Gadanki near Tirupathi which gives Wind profiles up to 100 km . We also developed a 400 MHz Radio Acoustic sounding system (RASS) for wind / temperature profiler and installed at IMD campus at Pashan Pune. Technology of acoustic sounding of atmosphere which led to the development of instruments like Phased array Doppler sodar/ mini portable sodars was developed by us. These instruments are being used at many places for atmospheric research and environmental monitoring . We have also developed Digital Radiosonde, Ozonesonde for which the technology is being transferred. to IMD for batch production. In addition SAMEER has completed development of 1680 MHz Radiotheodolite and automation /autocomputation of 400 MHz Radiotheodolites which were funded by IMD. The technologies developed are directly useful for scientists, researchers and operations personnel at Meteorological Department, and National Research Laboratories. As a core research activity we are pursuing development of Ka band Cloud radar.
SAMEER is developing the KA band radar through its core R&D initiatives.